Faculty, staff and students at Plano’s Faith Lutheran School gathered on Monday, November 11 with military veterans, special guests and others for two special programs recognizing the service of our country’s veterans.

“These events were a way for us to show our respect for our country and to express our thanks to veterans who have given so much so that we may enjoy many freedoms,” said Faith Lutheran School Headmaster Timothy Merritt of Plano.

“It was a hard time. I was away from my wife and my children,” said Jim.  “Most of my time was spent on a small island in the Pacific, and then I was in the Philippines for almost two years working in a tire shop.”

Ruth said that living in the United States during the war was very challenging and had far-reaching effects, but that every sacrifice was worth it.

“Living during the war was very hard, but people at home all pulled together and did whatever was needed.  We rolled bandages, and we rationed.” she explained.  “But it was not really a sacrifice at all when you look at what all of the military members gave to us. [Jim] says that he wasn’t a hero, but I think he was.” 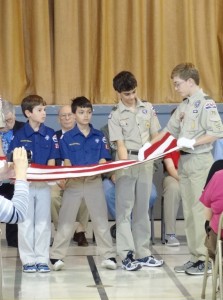 Following the Perry’s presentation, an all-school assembly featured a flag folding ceremony to teach students the meanings of each of the 13 folds of a flag in that ritual, the National Anthem was presented by the Faith Lutheran School Choir, and 18 veterans representing all branches of the military and many different wars participated in the event. 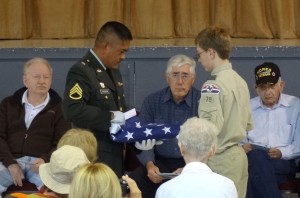